Why do I have to keep resetting my router?

Pretty much the first thing anyone does when they start having problems with their internet connection, is reboot their router. After all, rebooting your router usually fixes the problem – but why?

What is it about a reset (power cycle) that fixes problems? Well, there are several things.

For starters, a router is similar to a computer. It has a power supply, a processor (CPU), memory (RAM), and even an operating system (firmware).

Just like your computer needs a good reboot from time to time, so does a router.

Some routers are more well built than others and don’t require a reset as often, but for the most part any consumer-grade router is going to need a power cycle occasionally.

Consumer routers are generally built with lower quality hardware, slower speed components, and less rigorous software engineering standards compared to the routers that your ISP uses. As a result, they generally can’t go as long without a reset as their business-grade counterparts can.

Drain the electricity from circuitry

A proper power cycle involves disconnecting power from the device for 5-10 seconds, which allows for all of the circuitry in the router to fully discharge.

There are capacitors inside the router that take a few seconds to discharge, during which time, if you were to reapply power, the device would start back up but could continue to have issues since it wasn’t fully reset.

Memory in a computer system (or a router, in this case) gets fully erased when the power is cut. This is called volatile memory.

Don’t worry – there are also non-volatile memory types, which is why we don’t lose the configuration on our router as well when it is power cycled.

When power is re-applied, the router’s operating system boots from a fresh state, which fresh memory,  and is completely re-initialized so it can run at maximum capacity again.

Bandwidth hogs are shut down (at least temporarily) 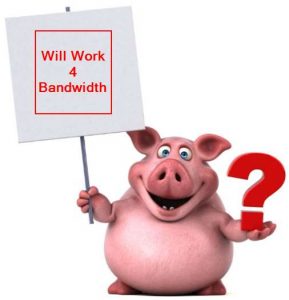 Sometimes, an internet connection is not working well because of a bandwidth hog. A bandwidth hog is defined as a person or device on your network that is uploading or downloading a large amount of data.

It could be something like a roommate downloading a new game on their Xbox, or something more systematic, like a computer downloading an automatic update.

This large upload or download creates a data contention issue, where other user’s data is slowed down because of the lack of bandwidth.

Sometimes this delay is all you need to finish what you were doing online.

Some routers have a dynamic channel allocation feature where they survey the other nearby Wi-Fi networks to see what channels are in use, and then they pick the channel that is least populated or has the least amount of interference.

What are your options?

If you are otherwise fairly happy with your current router, you may wish to simply continue putting up with the minor inconvenience of occasionally resetting it. You could also automate the resets so that you don’t have to worry about doing it yourself.

Depending on the model of your router, you may be able to schedule it to reboot at the same time daily or weekly. I do this with my router – I have scheduled therapeutic reboots to occur every day at 2:00 AM, when everyone in the house is sleeping and won’t notice the brief interruption associated with the reboot.

If your router doesn’t support scheduled reboots, you can also get smart power switches that can turn the power off or on depending on the time of day. You could obtain one of these switches and then connect your router through it and accomplish the same goal.

Get a new router

You could also just consider getting a new router. Here is a recommendation on a router that gets overwhelmingly positive reviews and most people report that it doesn’t need rebooting.